Leodis Pagan Circle hosts open rituals to celebrate the Greater Sabbats at Imbolc, Beltane, Lammas and Samhain. The rituals are simple and broad-based because they’re designed to cater for people who follow several different paths. Bearing in mind it isn’t always easy to find a group who will accept newcomers, not everyone who follows a solitary path does so by choice, so the open rituals are an excellent way for people to honour the changing of the seasons in a friendly communal setting. 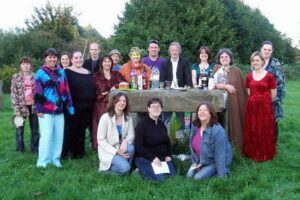 The rituals are held outdoors because we’re particularly lucky in Leeds to have easy access to a modern stone circle. Unfortunately, because the rituals are held in the open air, we do fall victim to the vagaries of the English weather. We don’t let the wind and rain stop us though – we just go ahead and hold the ritual anyway. The people who come to the rituals are extremely tolerant of the ways in which we are tested by the Elements and the atmosphere is always a happy one.

The actual rituals last for approximately 1 hour but, depending on the weather and the time of year, we often hang around afterwards to share a picnic or head for the pub. We don’t usually linger during the darker evenings but the circle looks magnificent when it’s all lit up (especially at Samhain when everyone brings a pumpkin lantern!).

There’s no particular dress code but some of us do dress in robes and cloaks (often with thermals underneath) – the area is open to the public though so we get some strange looks from dog walkers. Also, it’s advisable to wear stout footwear during inclement weather because the area can be a tad muddy. We don’t want to put you off by banging on about the weather but it’s best to avoid surprises by being forewarned. During the lighter, warmer months the circle is a glorious place to spend an evening but, rest assured, the colder, darker ones can be just as magickal.

There’s no need to be nervous if you think you won’t know what to do or that everyone else will be much more experienced. We often have newcomers join us and we’ll guide you through the whole process so you won’t feel excluded. You’re welcome to take an active part in the ceremony if you’d like to but it’s equally acceptable to just turn up and watch. If you’d like to bring anything with you to place on the altar (eg, flowers or something representing the relevant season), they will be a very welcome addition.

We’re easygoing and friendly group and if you’d like more information, please Contact Us and we’ll do our best to help. 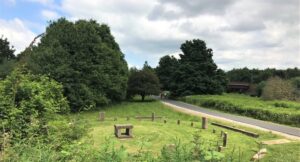 The magnificent stone circle that we’re privileged to use for our rituals was erected in 1997 as part of a scheme to revitalize the area. Originally, it was the brain child of a caretaker at Thwaite Mills Industrial Museum called Tony Douglass. His idea was taken up and developed by Leeds City Council in partnership with an organisation called Groundwork Leeds and, together, they commissioned a local artist called Melanie Wilks to sculpt the larger stones. Four of the sculptures represent North, South, East and West and four more represent sun-rise, midday, sun-set and night time. The land and the circle are owned by the Canal and River Trust who kindly give us permission to hold our rituals there.

The circle is situated by the canal side at Stourton. There’s a regular bus service between Leeds (Nos 189 & 110) and Wakefield (No 110) and there’s parking available at the site.

The rituals are usually held on a Tuesday evening close to the actual Sabbat; although this may vary from time to time.

It’s important people who intend to join our events read our Terms and Conditions before doing so. Please make sure you check out the small print.