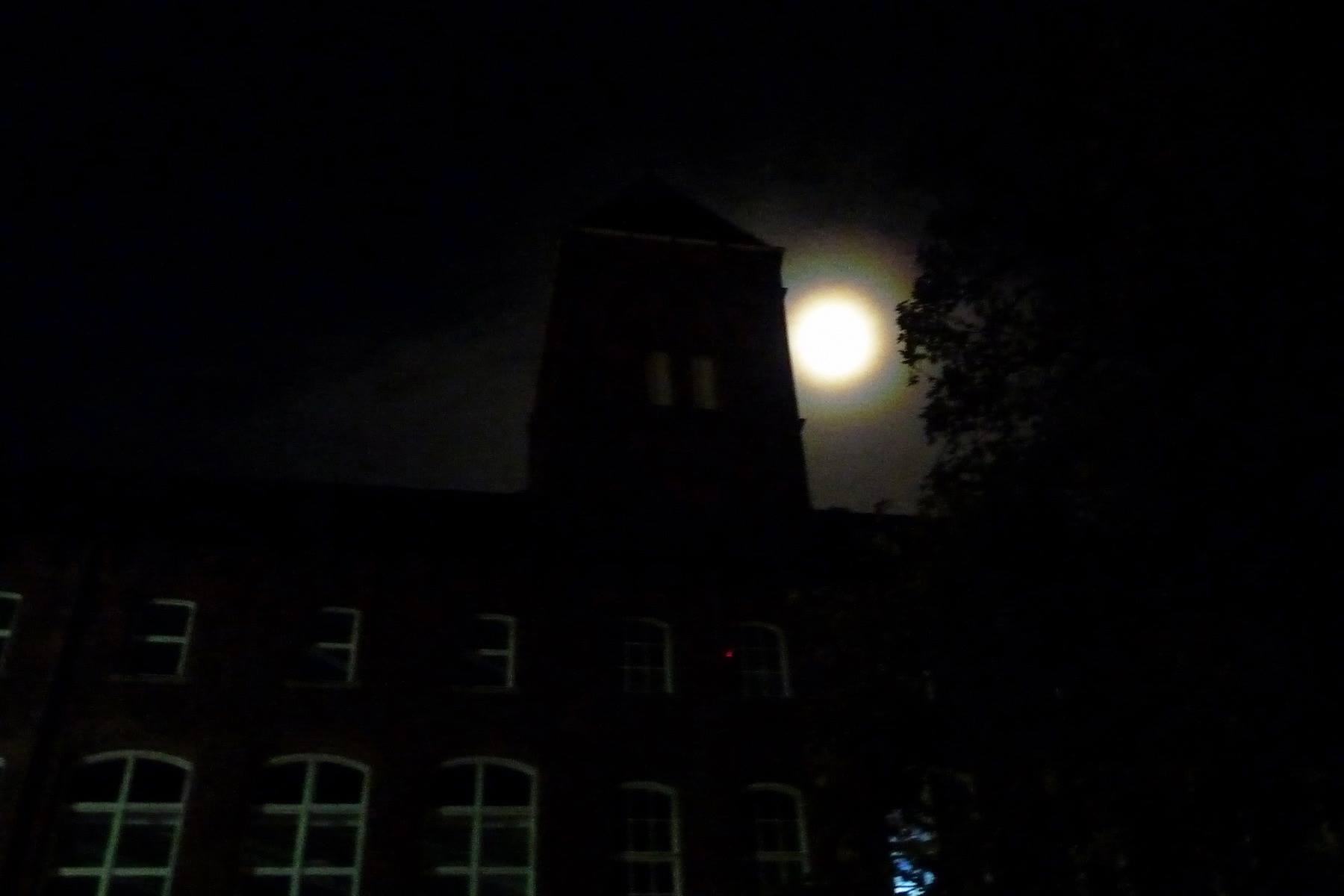 We started the investigation with a walk round the entire building with Sting Wray who gave us brief histories of the houses before they were opened up to for the centre. Noting the rooms with little or no IT where we felt we would be able to use the electronic equipment. Chris set up a control area in the coffee bar with motion sensors linked to the computer.

Room 17 was chosen randomly for the first vigil, a small room at the rear of the building… Started by calling out to spirit to join us.

Jane set up the EMF meter and we waited. Dave made contact very quickly with a female spirit, very weak but able to communicate. She was sitting at her desk writing. Showing him the letters F & J in particular. He felt she was very proud of her handwriting. He tried some automatic writing but as he is left handed and she right handed it was difficult. He got the name Florence Joyce, she passed aged 19. Died suddenly after a pain in her neck, her brother found her. Tina got the name Robert. Debs felt cold on her left side and Lavina felt she was being tapped on her shoulder.

We tried the spirit board with Karen, Stephen and Lavina, had more success just with the glass, it moved slowly and shakily but did respond to us.

Dave said the brother’s name was Sam or Samuel. Jane checked the temperature near Debs and Lavina and noted there was a distinct drop compared to the rest of the room.

We then moved to room 12 and Dave felt it was active but could not make direct contact with spirit, the EMF meter did not record any activity.

Moving around the building we tried various rooms but apart from everyone feeling there was some activity little communication was achieved.

In room 2 Mark and Tina called to spirit and felt we were being watched. We moved the chair belonging to Maurice Rowntree to the centre of the room and waited. Tina distinctly saw the chair back move as if vibrating for a moment. The rest of the group joined us and we sat in circle around the chair asking for a sign that spirit was present. We then moved the chair to the control area and left it in full view of the cameras and movement sensors.

Whilst we were in room 17 Chris had stayed with the equipment in the coffee bar and tried calling out for spirit to join him and got a distinct response that was recorded on his laptop. Sadly no movement was captured.

After a tea break we all gathered in Room 3. Forming a circle, we held hands and invited spirit to join us. Dave picked up on the spirit of a gentleman, Major Rathbone, died there possibly just after World War 1. Possibly consumption. He smoked a pipe and several of us could smell cherry tobacco. Jane felt her chest tighten and started coughing quite a lot even though she had felt well before we entered the room.

Major Rathbone was a very stern chap. Not impressed with our presence and not happy with the current use of the building. Debs asked him who was on the throne and Dave said his reply was ‘the King you stupid woman’.

Tina got the image of a very dark chestnut horse and we all concluded that was the Major’s mount as he told Dave he was very proud of his horse. He kept looking in the direction of the TV screen but Dave said it was a portrait on the wall he could see, the wall being where the archway opening the two rooms into one would have been.

Dave said he did not think he was one of the gentleman in the photographs on the wall, might have been the one on the left but the age difference was such he couldn’t be sure.

We thanked the Major for joining us, he didn’t respond but Dave said he was still there standing straight and ignoring us.

We then went into the computer room, the EMF meter was very active but because of the volume of IT equipment it was decided the readings could well be false although when held close to a computer did not register.

All in all for a first investigation we felt it had been a worthwhile evening, spirit were present but reticent to make contact with us. The building is so large to do a full investigation would take several visits, with more people to help build the energy. We had visited several rooms briefly and established they were probably active but more time would be needed to investigate further.

As we were loading the cars in the rear car park we all distinctly saw movement in two of the first floor rooms although no one was in the building, we decided the spirits were checking we had all gone!

With many thanks to the management of Swathmore for allowing this investigation, we would welcome the chance of another visit in the future to continue what we have begun, we feel there is more to uncover as we have just touched the surface with this first vigil.